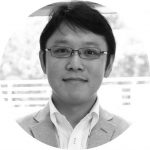 He always seeks state-of-the-art around his research field, so he studies international collaborative researches aggressively. He worked for smart cars at Australian National University in 2005, research of first-person vision in the Robotics Institute at Carnegie Mellon University as a visiting researcher from 2011-2012, and a bio-robotics at Georgia Tech as a visiting scholar in 2018.

He received B. E. degree in electrical engineering from Shibaura Institute of Technology in 2001, M. E. and Ph. D. degrees in information science from Nara Institute of Science and Technology, Japan, in 2003 and 2006, respectively.